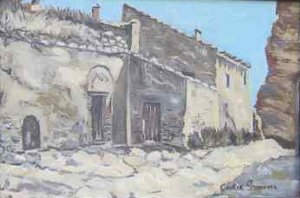 Remember Cecilia Giménez? She helpfully tried to restore a faded art fresco … and then she butchered it. As a result, her work became an Internets meme … then it became a media circus.

“I never would have attempted it if I knew it would lead to this,” Giménez told the Telegraph. “I started it, then I went on holiday and by the time I returned, well … you know what happened.”

A little lament won’t stop Our Lady of the Shaky Hand’s return to the Internets. She donated the painting above to the Roman Catholic charity Caritas. It was entitled Las Bodegas de Borja and featured a scene from Cecilia’s home town.

The charity sold it on eBay. The minimum opening bid was $390.00. Its provenance certainly helped move the needle. The work is attributed to Cecilia Giménez, the restorer of Ecce Homo, aka the Painter of the Beast Jesus. The charity didn’t just sell a painting, it sold an Internets meme. Las Bodegas de Borja eventually went for $1423.98.