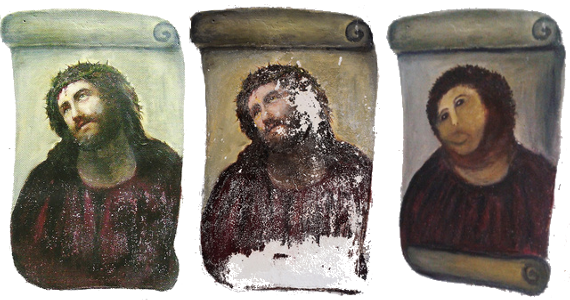 About a month ago, a church in Borja, Spain received a donation from the granddaughter of Elías García Martínez, a 19th Century Spanish artist who toiled at the tail end of an uninspiring academic tradition. It was the only known example of the artist’s work in town – a factoid that would help fuel this story’s over reaction.

The painting can be seen in the triptych above. On the left, we can see how it looked two years ago. It shows the onset of water damage. In the middle frame, we see how it looked when it was donated by the artist’s granddaughter. The paint was peeling fast. Finally in the third frame we see … WTF?

The third frame shows how the painting looks today – like an early hominid with constipation. What happened? An elderly neighbor was displeased with the painting’s condition. She took it upon herself to restore the work. It was quite an undertaking for someone with absolutely no training. Her restoration soon became too big for her; one thing led to another and, well, you can see the result.

A quirky story in the Information Age doesn’t stay local for long. This one was picked up by blogs and mainstream media outlets. Zee News, The National Post and The Telegraph referred to the damaged work as a “masterpiece.” Countless others used language that inferred it as such.

Certainly, this must be a disappointment for the church but the art world didn’t lose a special painting. Quick – how many of you heard of Martínez before this incident? It’s an interesting story but let’s not get carried away. Losing this Martínez is like losing a Warner Sallman.

UPDATE: The restorer’s name is Cecilia Giménez. On Spanish television, she claimed that a priest had advanced knowledge of her effort.  Borja “authorities” are considering legal action but they insist their priority is restoration. Yes, please! Somebody restore that 19th Century piece of shit to its original form so the public can see where the decorative salt-n-pepper shaker market derives its inspiration.