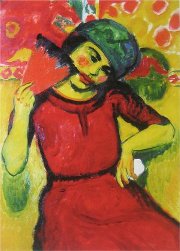 We love the Neue Gallerie.  And it’s not because we helped finance its collection, the Neue’s exhibitions are always well-curated and deeply satisfying. Last fall, the Upper East Side gallery dedicated two full floors to Ferdinand Hodler. It was the largest New York exhibition of the renowned Swiss artist to date.

Hodler is well-known for his symbolist work but the Swiss painter  adapted an expressionist aesthetic late in his career. It is for this reason that he provides a nice segue into the Neue’s winter exhibitions.

Opening February 7th, the gallery will present  German Expressionism 1900-1930: Masterpieces from the Neue Galerie Collection.  According to the New York Times,  it will include many of the Neue’s greatest hits, like Hermann Max Pechstein’s “Young Woman With a Red Fan” (shown here on the left) and Kirchner’s “Tightrope Walk.” Neue goers can expect to see works by artists such as Lovis Corinth and Gabriele Münter, that have never been shown at the museum before.

On the same day, the gallery will open a second exhibition: German and Austrian Decorative Arts from Jugendstil to the Bauhaus. It will feature art from the collection of Harry C. Sigman, a wealthy Los Angeles lawyer who was drawn to the gallery because, as he told the Times, it “is one of the only museums in America that is specialized both by geography and by time.”

Ronald Lauder is the owner of the Neue Gallerie. Sigman met him just once before he decided to donate more than 100 works to the gallery. Sigman said it just felt like a perfect place to house those items. We agree.