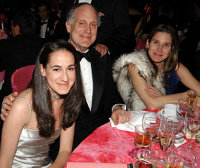 As the Top One Percent prepare for the oppulent excess of Art Basel Miami Beach, the New York Times published a detailed summary of art collector Ronald Lauder’s uncanny ability to shield his wealth from taxation.

Lauder is the heir to the Estee Lauder fortune and owner of the Neue Galerie on Fifth Avenue and 86th Street. In celebration of the museum’s 10th anniversary, Mr. Lauder’s personal collection is now on display. It spans the medieval period to the modern era. Of personal interest were several preparatory drawings by Van Gogh along with German expressionist works by Otto Dix, Max Beckman and Egon Schiele. (Mr. Lauder bought his first Schiele years ago with his bar mitzvah money.)

Unfortuantely, the exhibition lacks context beyond “look what I can afford.” Some works felt like they were collected on the basis of availability, not as the coveted card of an inside straight. The collection was not nearly as satisfying as a Met retrospective but it’s worth $20.00 and a few hours of time. It provides an opportunity to surmise the manner in which you’d invest the billions that you inherited from mumsy.

The Federal tax code provided Lauder incentive to buy all he could. He’s entitled to deduct full market value of all works he donates to museums including museums he owns. At the time he amassed much of this collection, the deal was even sweeter. Lauder was able to deduct a portion of a work’s value without actually donating it to a museum.

In fairness to Ronald Lauder, his collection is more readily accessible than others that were amassed with the aid of tax loopholes. Neue Galerie exhibits are always worth visiting and I suggest you take an opportunity to view the owner’s personal collection. Afterall, you helped finance it.