One of my favorite movies is Who the #$&% Is Jackson Pollock? It’s a documentary about foul-mouthed, dumpster diving, grandmother named Teri Horton.  In 1992, she purchased a painting in a thrift shop for $5.00. As luck would have it, there’s a chance it was painted by Jackson Pollock. When she tried to authenticate it, she ran into a wall of skepticism erected by art world insiders. Who could blame them? It lacked provenance, a signature and it was found in a thrift shop. If Pollocks sold for fifty thousand dollars, then it might be a Pollock. Since they sell for fifty million dollars, it’s not a Pollock.

Undeterred, Ms. Horton went to great lengths to authenticate the painting and sell it as a Pollock. She hired Peter Paul Biro, a forensics expert from Montreal, who matched finger prints on the canvas with some taken from Pollock’s Long Island workshop. Based on this evidence, Ms. Horton received a $9 million dollar offer for the painting. She declined. Bolstered by Mr. Biro’s forensics work, she was determined to sell the painting for $50 million.

Last year, David Grann published a piece in the New Yorker in which he suggests that Biro may have fabricated the fingerprints he found on clients’ paintings, including those on Ms. Horton’s “Pollock.”  Working with a crime lab technician, Grann discovered aspects that were inconsistent with normal fingerprints but matched a fingerprint cast that Biro made from a paint can in Pollock’s studio.

The Biro filed a defamation suit against David Grann and Conde Nast last month. The alleged forger accuses Grann of publishing a forgery. Will it be poetic justice or egg in the face? Stay tuned. 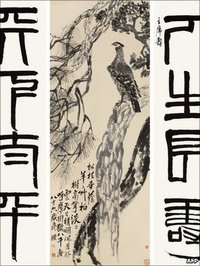 The Chinese art market shows no signs of abating. At the end of last month, an ink wash painting by Qi Baishi sold for 425.5 million yuan ($65 million) at the Garden Spring Auction in Beijing. The work, Eagle Standing on Pine Tree with Four-character Couplet in Seal Script, was completed by Qi in 1946 and presented to General Chiang Kai-shek for his 60th birthday.

In the history of Chinese mainland art, the final price was second only to ancient calligrapher Huang Tingjian‘s hand scroll “Pillar Ming,” which was sold for 436.8 million yuan in 2009. Huang had a pricing advantage associated with age and rarity. Qi’s ink wash was by far the most expensive modern Chinese work.

In 2010, ART PRICE released its data of auction sales by artists. The top artists were familiar to most Western eyes. Picasso and Warhol top the list almost every year. But a new artist appeared seemingly out of nowhere. Qi Baishi was ranked third in sales behind the previous two.  When the ART PRICE lists are again compiled from over 6000 auction houses from around the world, I expect to see Qi second only to Picasso.

A Netflix for art? Artsicle, a New York based startup has created a web-based art service that allows collectors to try works in their home for as little as $50.00. Pieces tend to be original art from what Artsicle terms up-and-coming artists. The company allows collectors to select works from an online inventory and try them in your home. After thirty days, they can choose to buy the work or return it for another.