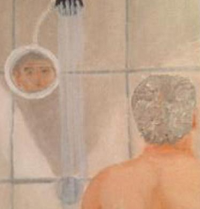 Back in the Naughts, I documented my outrage with the Iraq War on Blog Day Afternoon. For five straight years I threw snarky spitballs at the Bush Administration from the back of the proverbial room. So when the former President’s secret paintings were revealed this week, several BDA readers wanted to know what I thought of them. My response was probably disappointing: I don’t hate them.

There’s rumors on the Internets that an intruder known as Guccifer infiltrated an online email account that belonged to W.’s sister. Basically he guessed her password. Once inside he found a trove of pictures and personal correspondence. Guccifer was nice enough to share three of particular interest to this blog: Paintings by George W. Bush.

Given that Dubya destroyed three businesses, launched an unprovoked invasion and fiddled while New Orleans drowned, these might be his finest accomplishments. They’re a little touching if somewhat naive.

By his own description, the former leader was a “War President” who famously touched down on a aircraft carrier and paraded the deck in a military flight suit. He was The Decider, a heroic description somewhat at odds with his fumbling grasp of language and his penchant for accidents. As the spotlight receded into the Dallas suburbs, the former Commander-in-Chief appears to have taken another attempt to reshapen his image. This time he is depicted in a much more vulnerable position: Alone and naked in the shower.

So, no, I don’t hate these paintings by George W. Bush. Perhaps if he was raised by parents with less aspiration for power, he could have pursued the arts rather than the wars that defined his ill-fated presidency. But it’s hard to imagine Poppy with tolerance for that sort of thing. For him art is a hedge against inflation. It’s unfortunate. The country would have been better served by this somewhat surprising twist in its narrative.