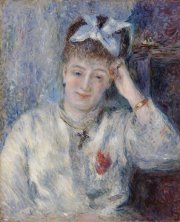 “Portrait of Mademoiselle Marie Murer” (1877), acquired in 1924. The book documents the provenance of this and every Renoir in the Barnes collection.

The Barnes Foundation was a educational institute established by its namesake in 1922. Albert C. Barnes amassed a fortune from the development of the antiseptic drug Argyrol which was a reasonable treatment for gonorrhea. His earnings helped fuel an obsession with Turn-of-the-Century French art.

During his lifetime, Albert Barnes  amassed hundreds of pieces of Impressionist, Post-Impressionist and Modernist art as well as furniture, artifacts, and highly crafted objects. Barnes created a somewhat eclectic collection yet it is concise in one regard: it is characterized by an obsession with Renoir.  The Barnes Foundation houses 178 pieces by the French master.

Because Renoir is distributed throughout the Barnes’ galleries, it’s difficult to appreciate the founder’s devotion to the master. The Lucy/House book documents all these works and provides them with the prominence they deserve. Renoir in the Barnes Collection also delves into the collector’s somewhat controversial claim that Renoir was a modernist.

As Sozanski points out, this characterization of a painter of voluptuous nudes in Arcadian settings may strike many as incongruous. It’s not easy to imagine Renoir dabbling in modernism then talking shop afterward with Henri Matisse.  Yet Barnes’ claim persists. The exhibition Renoir in the 20th Century was curated in support of the notion.  Martha Lucy agrees.

“Part of what I try to do is overturn the idea that Renoir doesn’t fit into the collection. Renoir was a modernist for his time and for artists who came after him,” she writes in the book. “Barnes wanted to show that modern art is not a rejection of tradition.  Renoir helped him make a pedagogical point.”

Near the end of his life, Renoir did break with his own tradition. He added what Claudia Einecke refers to as “modernist flair.” His subjects were removed from fashionable bourgeois settings and placed against contrasting neutral backgrounds. Several wore costumes that were distinct from their roles in daily life.

Modernist? If we paint the term with a very large brush then we can include 20th Century Renoir with the modernists. Yet the “flair” we find in Renoir at this time was already in committed to canvas by others. He was to modernism what Rod Stewart was to disco. The White Pierrot, which Renoir in the 20th Century cites as an example of “disorienting alienation” was his version of Do You Think I’m Sexy?  Renoir was jumping someone else’s train, a notion that Ezra Pound would have probably found unbecoming.