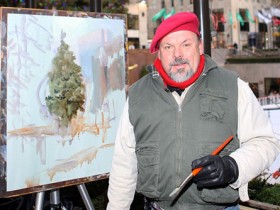 A few years ago, Vienna provided the art world with Robert Mang, a thief of sophistication with an eye for refined women and an affection for Renaissance art. At four in the morning, he prowled through the halls of Vienna Museum of Art. He could have left with anything. He selected a Benvenuto Cellini.

Ransom notes were exchanged. And police followed an elaborate paper trail but it was pictures from a surveillance camera in his mobile phone that led to his downfall. Mang was arrested three years after the theft. He was tried and sentenced to four years in a Viennese court. When his picture made the local papers, he was suddenly popular among Viennese women who were susceptible to the allure of a handsome bad boy.

Here in the US, thieves broke into an abandoned California shop in search of copper wire. This type of theft is so prevalant in that state, whole neighborhoods are reported black for lack of copper wire. Inside the shop, our intrepid thieves stumbled upon a large trove of Kinkade kitch. They made off with at least forty works with a reported value of $300,000.00.

Sell fast, my pretties. The market value on that shit comes with a shelf life comparable to a fruit fly with the Ebola virus. Kinkade was the Robert Wood of the Mega Church set.