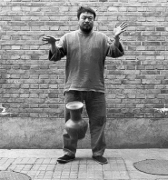 Ai Weiwei is kind of visionary most countries would be proud to count among their artistic classes. His creativity has helped pull the international spotlight toward contemporary Chinese culture. His persistence has drawn attention to the plight of underclasses and the abuses of political power. And he has helped form an iconic image of contemporary China with his design for the Olympic stadium.

Instead of celebrating an extraordinary career, China placed him in jail.

This spring, Ai participated in an online campaign for a Chinese style “Arab Spring.” In April, a huge contingent of police cordoned his studio. They entered and searched the premises. Officers left with laptops and hard drives. Ai was detained along with eight studio workers, his wife and his son. The official line was that Ai was arrested on economic crimes. A day after that announcement, police returned to his studio in search of evidence to support the charge.

He was detained for three months against a backdrop of international outrage.

Now new details emerge of Ai Weiwei’s detention. According to a New York Times report, Ai was held in a tiny room and watched 24 hours a day by shifts of two military guards who never left his side. The guards were never more than 30 inches away — even as he slept, shit, showered and shaved.  Ai described this type of scrutiny as “mental torture.” And “it worked,” he said.

Mr. Ai’s associate, who insisted on anonymity because of the risk of official retaliation, said that from the very beginning of his detention the police made it clear that it would be a difficult experience. “He told me that when he was taken from the airport, the police told him: ‘You always give us trouble, now it’s time for us to give you trouble’,” the associate said.

Arrests for tax evasion are rare in China. Ai Weiwei’s “crime” was an appeal for democratic reform. As long as China continues to use incarceration for rebuttal it does not deserve the kind of prominence that Ai’s career helped bestow upon it.