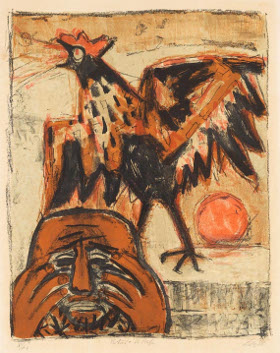 Description: After the Second World War pushed the First into distant memory, Dix turned his attention toward biblical themes. He wasn't a particularly devoted man, but he was drawn toward alegory. His work had always featured subtle religious references. By midcentury, they featured prominently.

This color lithograph depicts one particularly moving scene. With Jesus' words still fresh in his head, Peter started to sob. "Before the rooster crows, you will deny me three times."  He had good reason to cry. A few hours earlier had pledged devotion. Now his world was in ruin.

Printed by Ehrhardt, released by the artist.