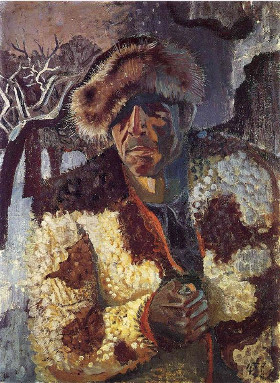 Description: When the Third Reich fell at the end of the Second World War, Dix was freed from the Nazi's artistic oppression yet his style never regained its Interwar edge.

His war, the First World War was a distant memory and Dix didn't seem to have much stomach for the depicting the Second. His late period is characterized by a large number of self-portraits. This one, from a private collection in France, is considered among the most important.

Rembrandt famously depicted himself in a fur hat. So did Vincent van Gogh. Like both those artists, Dix pays particular attention to the details of material texture. The fur cap, the heavy jacket and leather gloves overwhelm the artist's face and hands. This was a remarkable departure from his portraiture statements during the 1920s.