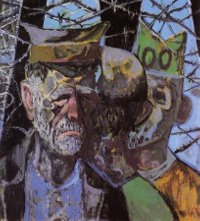 As Nazi Germany collapsed, Otto Dix was drafted into Volkssturm along with other old men and young boys. He was promptly captured and ended the war in a French POW camp. While in the camp, he was granted access to art materials which he used to paint a triptych for the prison chapel. While he did create work inside the camp, this portrait was done from memory after his release. Prisoner Dix is an old man with a deeply lined face, troubled by his circumstances. His stoic demeanor is contrasted with that of the Fool behind him.

During this period, he undergoes stylistic changes. His brush strokes become shorter and end more abruptly. The overview is more shredded and porous. Dix was trying to remain relevent as another human tragedy brought its influence to bear on 20th Century art.