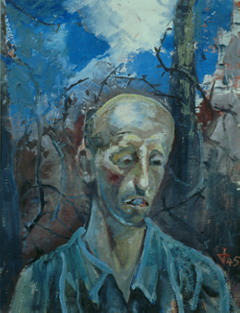 Portrait of a Prisoner

Description: When the NSDAP came to power, Dix was forced into self-imposed exile near the Swiss border. The new regime branded him a degenerate and destroyed as much of his art as they could find. Fortunately for posterity, many of his pieces were in private collections.

In the final stages of the war, Dix was conscripted into the Volkssturm, a military homeguard comprised of young boys and old men. He was soon captured by the French and spent the duration in a POW camp. Dix was granted access to materials and he painted a triptych for the prison chapel. Portrait of a Prisoner was completed inside the camp.

The prisoner is a sympathetic figure. Dix forgot his tendency to accentuate his subject's worst features. After the war, his art would take on a strong relgious tone. Here we find a foreshadowing of that tendency as barb wire creates the prisoner's crown of thorns.