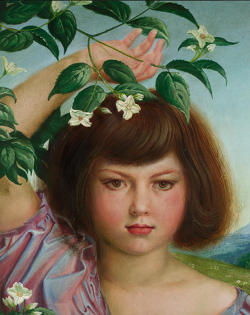 Description: During the height of Nazi power, Dix went into inner exile. Like Thomas Mann, his views were at odds with the regime but he chose to remain in Germany after 1933. In order to avoid confrontation, he conformed outwardly with the regime. Dix was in his 40s with a wife and children when the Nazis came to power. It's easy to empathize.

At the same time, the Nazis effectively ended his extraordinary post-war run. Dix buried expressionism when once Hitler took control of the state. He tamed his style and softened his motifs.

This work is a typical example from the period. Dix portrays his daughter is soft tones surrounded by gentle flora. It would not be out of place in a room full of Thomas Kincaids. The artist remained in Germany in order to support himself with work that at times was close to kitsch. It was a decision that would place a 13 year void in the middle of his career.