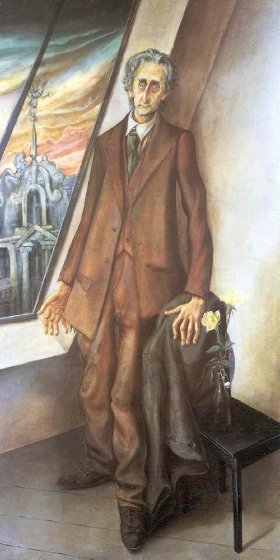 Description: Iwar von Lücken was the last in the line of Baltic aristocrats. He was born into privilege and died in poverty under unknown circumstances. His aesthetics were of the avant garde while his family was entrenched in tradition, a difference that cast von Lücken as a black sheep.

Iwar von Lücken was a poet whose work is reduced to a thin single volume. He'd be a literary unknown if not for this portrait. Dix provided post mortem fame that he was unable to obtain with a pen.

To Otto Dix, von Lücken was a sorry figure and that's probably what drew him to the artist. Dix accentuates his poverty -- the poet's complexion is gaunt and his suit was cut before he grew thin. The poet slouches and needs a chair rail for support. Peter de Mendelssohn saw him Berlin soon after he posed for this portrait. The poet with the enobling "von" was seen begging for coins in a cafe.