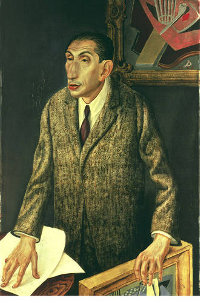 Description: Alfred Flechtheim entered the art world as a collector of Far Eastern art. In 1910, he married the daughter of a wealthy Dortmund merchant. This union helped provide him with the means to open a gallery in 1913. On the eve of the First World War, Flechtheim's gallery was filled with works by the French avant-garde. He had a reputation as Francophile with a particular affection for Cubism. In Düsseldorf, local artists unfairly suggested that he had turned his back on German art. In this unflattering, uncommissioned work by Dix, he is surrounded by Cubist works. He clutches one in one hand and bills in another. To Dix, he's little more than a salesman in a cheap suit, hawking foreign merchandise for the local Bourgeoisie.