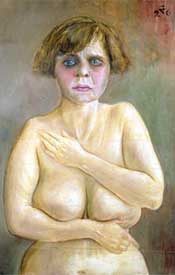 Description: Maureen Mullarkey described this work as an "unsettling variation on the effect of postwar deprivation on the socially marginal, particularly women of the red light district." The portrait, she says, "presents a blowzy hermaphroditic figure; a powdered male head sets on a shambling female form." Her heavy make-up attempts to mask the truth her body reveals. Life is hard on the down trodden.