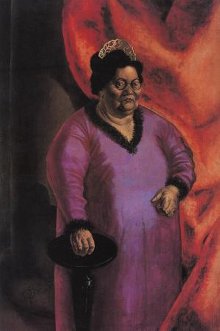 Description: This unlikeliest of art dealers was known as "Mother Ey" to the artists she nutured. After a failed marriage, Johanna Ey opened a bakery near the Düsseldorf Academy of Arts where she helped and encouraged young artists. The cafe exhibited their works.

Her foray into the art world was initiated by friendship. The artists who frequented her cafe needed recognition and money. She provided them wall space and credit. On occasion, she even darned their socks. She soon became an energetic proponent of Modernism and an important regional dealer.

In the midst of the Great War, she closed the bakery and opened a gallery. It was shut down in 1934 when the Nazis branded her artists "degenerates." According to art historian Sergiusz Michalsky, "Johanna Ey's portrait was painted more often than that of any other woman in Germany."