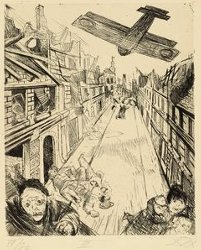 Lens was occupied by the Germans during the First World War. Its civilian population suffered terribly in the Allied campaign to dislodge them. Here residents flee an aerial assault.