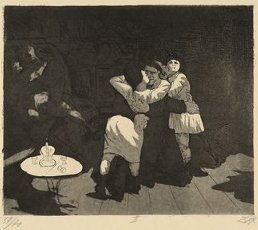 Dix often displays contempt for sailors. After a few early engagements with the British fleet, the German Navy spent most of the war in harbor. Dix's sailors are often seen whoring while the Wehrmacht suffered the nightmare of the trenches.