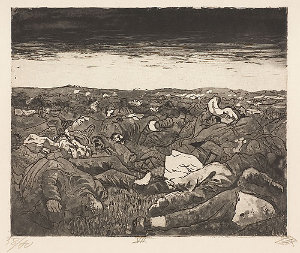 Description: The Ypres lines were among the most hotly contested in the Great War. In 1917, Haig attempted another assault on German positions. The goal was Passchendaele. If the British could capture the town then they could straighten their line and create a more defendable front. With a brutal inital assault, the Biritsh met their early objectives in a week. Months later, they recaptured what remained of Passchendaele. Here Dix depicts the price of a straightened line...