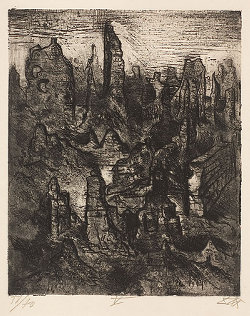 Description: During the Third Battle of Ypres, British troops captured Langemarck located near the strategic objective of Passchendaele. A German counter-offensive re-captured most of the ground around Langemarck. This lithograph likely depicts what was left of the town after Dix and the Germans returned. For their part, the British troops ultimately captured Passchendaele and declared victory. When the battle ended, little was changed on the Western From except the casualty lists, 310,000 on the Allied and 260,000 on the German side.