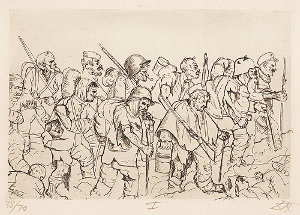 Description: Early in the battle, British troops advanced along a 25 mile front after a lengthy bombardment. The Germans retreated to reserve treches. The British advance soon stalled in the face of re-established machine gun positions. In the end, the Allies moved the front less than seven miles. Over a million men perished. Here Dix illustrates the results of the early British success.