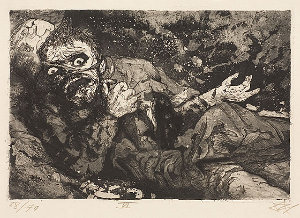 Description: Bapaume was hotly contested in 1871. In the fall of 1916, it was an Allied objective during the Battle of the Somme. In the Second World War, armies would battle there once again. Dix survived but the images of wounded men haunted him.