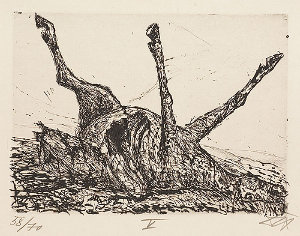 Corpse of a horse
Pferdekadaver

Description: It is said that men often go into battle with a plan to fight the previous war. Great War combatants on both sides held on to the notion of a great cavalry charge that would stem tide. Horsemen never had a chance to prove their daring on the Western Front. The nature of warfare had changed dramatically since the Franco-Prussian war.

Armies became entrenched and cavalries were held in reserve but that didn't mean horses were immune to savagery. Work animals still moved men and material to the front. The war indiscriminately destroyed anything in its path.