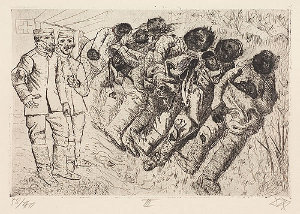 Description: By 1924, the audience aware of the horrors of gas but censored wartime reporting spared many from its ghastly details. Here the results are depicted with raw clarity of someone who was there. Indeed, much of Der Krieg was based on Dix's wartime diary drawings. Many were probably struck by the appearance of the victims, darkened for lack of oxygen and the nonchallance of the medical staff who had seen it many times before.