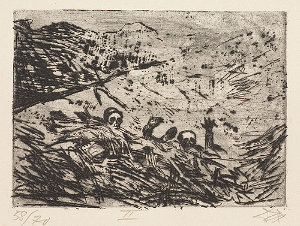 Description: The series opened with a soldier's grave between the lines. The second plate provides a graphic depiction of how such graves are produced. Soldiers react in horror as the earth collapes around them. In the instant before they are swallowed, Dix depicts them not as they are but as they will become. Their faces are reduced to depictions of skulls.