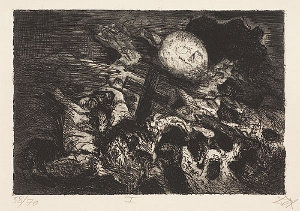 Description: This is the first plate from Dix's series about the Great War. It was called The War and it was modelled on Goya's The Disasters of War devoted to the Spanish War of Independence. Dix opens the series with a reflection on the First rule of battle: Young men die in war.