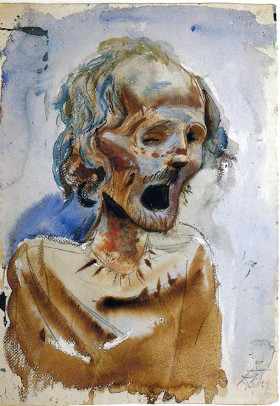 From The Catacombs Of Palermo I

Description: In the winter of 1923, French and Belgian troops occupied the Ruhr Valley to ensure Germany repay its war reparations. The Deutschmark was in freefall as hyperinflation gripped the country. During this time, Dix travel to Italy.

In Palermo, he visted the famous Catacombs dei Cappuccini and produced several sketches there. Upon his return to Germany later that year, he transformed several of them into a series of watercolors. In this work, he depicts the sunked skull of a seated corpse. It's body is still clad in the simple brown habit worn by the Cappuchin monks, many of whom were embalmed in the catacombs. This monk's unruly head and facial hair continued to grow for a period after his death.

The Palermo series was produced between The Trench and The War portfolio.