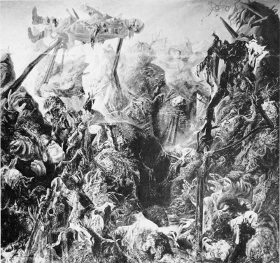 Description:
This was the painting that made Otto Dix famous. In 1931, Alfred H. Barr referred to it as "perhaps the most famous picture painted in post-war Europe. Presumably destroyed during the Nazi era, it receives far less attention now.

The artist began work on The Trench in 1920 while he was still in Dresden. It traveled with him to Dusseldorf where he completed the work in 1923. The painting depicts a German trench in the aftermath of an artillery assault. It is filled with mutilated bodies, fragments of skulls, torn limbs, shred intestines and tattered uniforms.

The controversy began that year when it was acquired by the Wallraf-Rchartz Museum in Cologne. Apart from its abhorrant depiction of war, the work drew controversy from the political right which claimed it dishonored the men of 1914. Since public money was used to acquire the painting the dispute was sharp and loud. There were few in Cologne without an opinion. It was finally settled in 1925, when The Trench was returned to Karl Neirendorf, Dix's dealer.

In the 1930s, The Trench was seized by the Nazis and included in their exhibitions of degenerate art. Nazi records indicate was it sold for $200.00 in 1940. It is presumed destroyed.