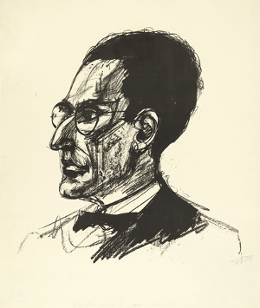 Description: Otto Klemperer was a German conductor and composer. He was widely regarded as one of the leading composers of the 20th Century. His reputation may have spared him from the Dixian treatment. In this piece, he cuts an almost majectic image.

This piece was completed in 1923. At the time, Klemperer was working at the Cologne Opera House. It was his fourth major position since 1910.

American readers may know Otto Klemperer as the father of Werner, the American actor who played Colonel Klink on the sitcom Hogan's Heroes.