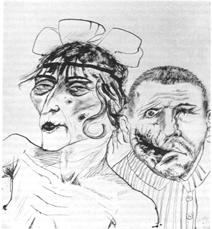 Description: She bears a syphilitic scar that resembles a bullet hole. He has a war wound that looks like female genitalia. To Dix, they are both casualties of a system that recruits bodies for payment.

Originally entitled Whore With War Cripple it was renamed Two Victims of Capitalism when it appeared in the communist journal Die Pleite. 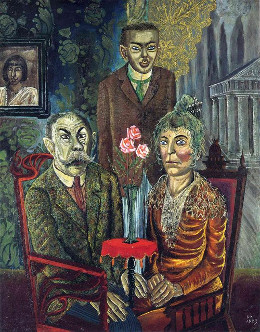 The Family of the Painter Adalbert Trillhaase

Description: Adalbert Trillhaase was a sculptor and allegorical painter from Dusseldorf. He was one of the artists in the circle of Johanna Ey, a baker turned art dealer who nutured young artists from the Dusseldorf academy. It was at the academy where Trillhaase met Dix. His family sat for Dix in 1923.

Trillhaase's own style has been compared to the British artist and occultist Aleister Crowley. In 1931, both artists were shown in Karl Nierendorf's "The World Below." Otto Dix was also displayed in that exhibition. One of his contributions was The Family of the Painter Adalbert Trillhaase.