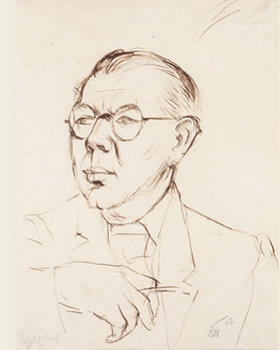 Hugo Erfurth With A Cigarette

Description: Hugo Erfurth was an established photographer by the time Dix arrived in Dresden. His subjects included many leading figures in the Weimar Republic but he was also determined to photograph younger subjects, the rising stars of the 1914 Generation. He photographed Dix on several occasions.

The artist returned the favor and captured Erfurth on both paper and canvas. Dix painted Erfurth along with his family along and faithful German Shepard. While his later portraits would accentuate Erfurth's worst features in true Dixian fashion, this early ink drawing flatters him.