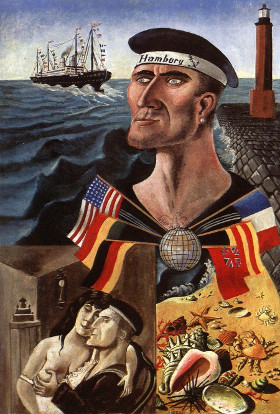 Description: In the summer of 1921, Otto Dix visited the port city of Hamburg on the North Sea. As he walked along the waterfront, he saw sailors on leave as they searched for pleasure on land. Along the red light district, Dix found brothels and prostitutes in abundance. It was a scene that may have helped reinforce earlier prejudices.

During the war, Dix often held sailors in contempt. The High Seas Fleet was in harbor for much of the conflict. From the artist's perspective, its sailors were chasing prostitutes and drinking gratuitous amounts of alcohol while the Wehrmacht bore the brunt the war's burden.

Dix's interpretation of a sailor's life as a string of exotic encounters has been described by Ashley Bassie in Expressionism as "intentionally kitch." A sailor's longings last as long as the time between ports of call.