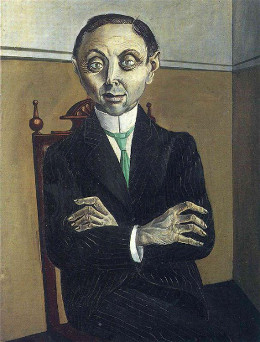 Description: Paul F. Schmidt was a German museum director and art critic. He was a forward-looking man who admired modern artists. In his first full-time assignment as the head of municipal art collections in Magdeburg, he attempted to fill the print room with young German and French artists. The backlash from an older generation was swift and heavy. Schmidt quit the museum when his vision was dashed.

From Magdeburg he moved Munich before settling in Dresden as the director of modern art in the City Museum. In 1921, he published Dix's Radierwerke I and II. Such progressive purchases put him in the cross hairs of local right-wing politicians. When the NSDAP seized power in 1933, he was forced into retirement. He was thus one of the first victims of Nazi cultural policy.

Schmidt moved to southern Germany before the Second World War where he faded to obscurity. Yet he was a large figure in early 20th Century German art. This portrait, which is both charming and grotesque, is a delightful reminder of his legacy.

The F. in Paul F. Schmidt stands for "Ferdinand."