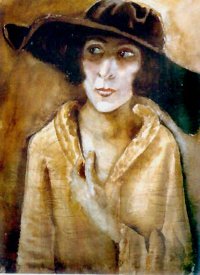 Description: Unlike its European counterparts, the German middle class did not seek distinction granted by royalty. Before the War, for example, Oscar Huldschinsky refused the Kronenorden by saying, "If no one has thought to honor my contribution to German Industry, I'm not going to accept a medal just because I went boating with the Kaiser." The title most sought by businessmen was Kommerzialrat. For lawyers it was Justizrat. Such titles were so coveted that wives were often addressed with their husband's title, hence Frau Doctor Hans Koch. "Doctor" was removed when she became Frau Dix.