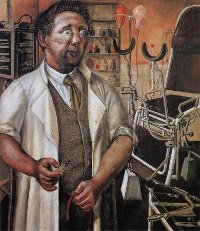 Description: Doctor Koch was a kidney and bladder specialist in Dusseldorf. He is depicted in a menacing chamber of medical equipment. Dix befriended the Doctor then took Frau Doctor to his bed. When Dix returned to Dresden, Martha Koch followed him. She left her husband and two children behind. The Doctor was unperturbed because he had already begun an affair with Maria Lindner, his wife's older sister. Dix and Koch became brothers-in-law and remained friends until the Doctor's death in 1952.