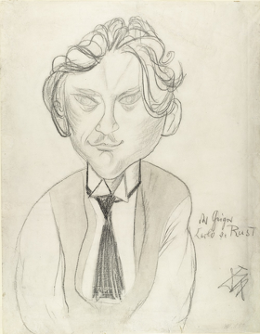 Description: In 1920, Dix was an art student in Dresden. He was surrounded by artists from all over Germany. During this time, he sketched many people from that community. This is his rendition of a violinist named Laslo von Rust.

This work is part of the Musuem of Modern Art's permanent collection. It's incorrectly listed in the catalog as "Carlo von Rust." From the inscription on the left, we can clearly see the violinist's name is "Laslo."